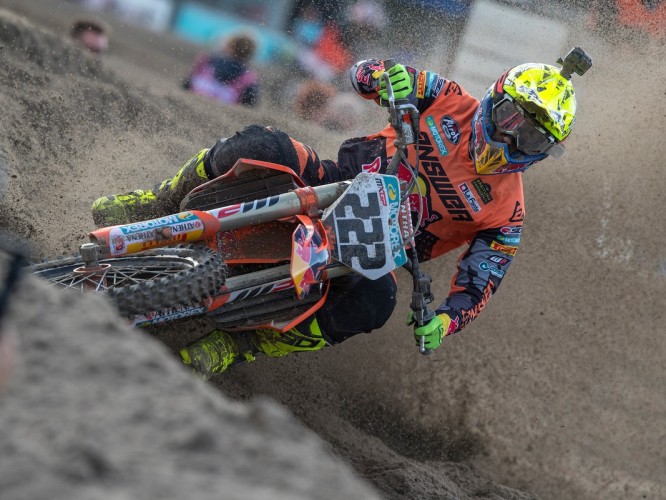 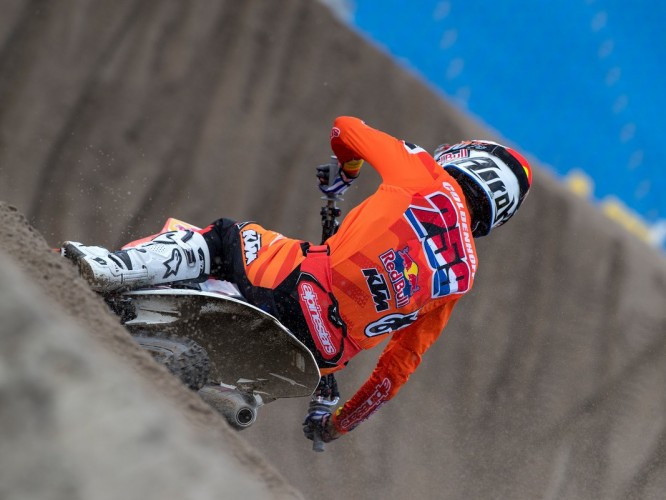 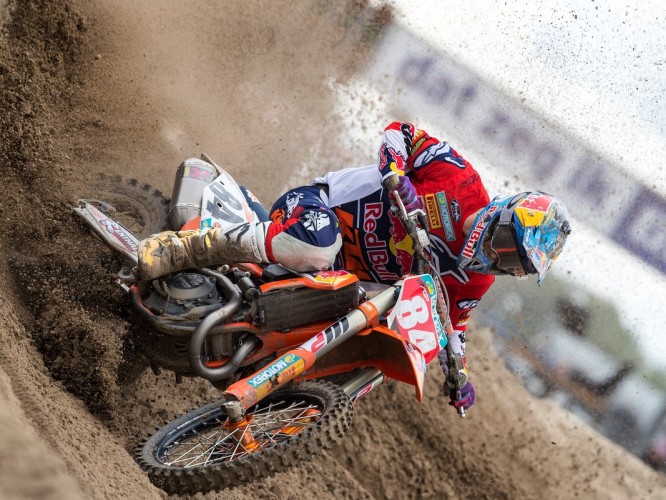 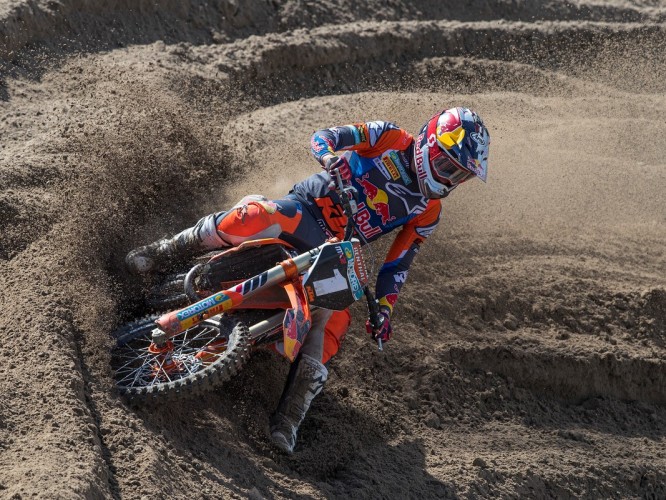 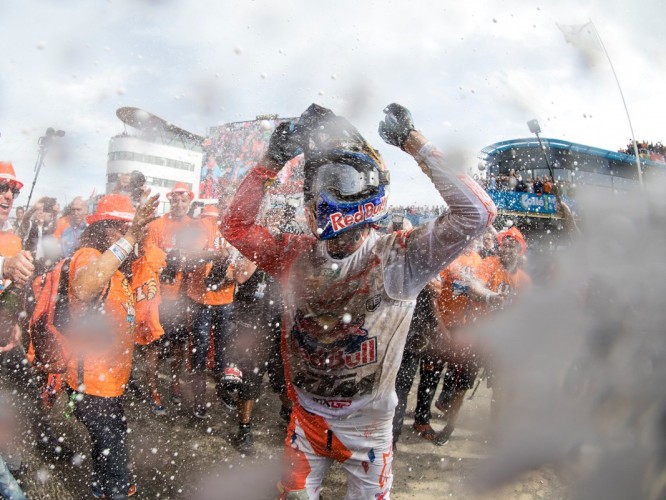 Herlings secured his first world championship with the KTM 450 SX-F in the premier class of the FIM series.

For the fourth year in a row the temporary and spectacularly set motocross course laid over the stadium section of the TT Circuit Assen provided a rough, tight and curvy test. The sand benefitted from a slightly revised layout for 2018 but made largely the same inventive use of space next to the vast grandstand that was filled with most of the 40,000 attendance.

Red Bull KTM came to the 19th round of 20 in MXGP having mathematically confirmed both MXGP and MX2 world titles and expecting to see the first of the season-long duels between Jeffrey Herlings and Tony Cairoli as well as Pauls Jonass and Jorge Prado decided on the bumpy Dutch terrain.

Herlings secured his first world championship with the KTM 450 SX-F in the premier class of the FIM series – becoming the first Dutchman to do so for 30 years - and the fourth of a career that begun with his current Red Bull KTM team in 2010 at the tender age of fifteen.

Setting off from the first pick in the gate after posting his twelfth Qualification Heat victory on Saturday, Herlings passed Tony Cairoli before the end of the first lap and was cheered all the way to the chequered flag. The 24 year old cruised to the line almost forty seconds ahead of the pack and began the celebrations. He provoked a gasp from most of the circuit in the second moto with an early race crash but then hiked the entertainment factor by cutting his way through to win once more. It was Herlings’ seventh Grand Prix triumph in a row and 14th moto success; he was last beaten in Indonesia in July.

After 19 Grands Prix (of which he contested 18) and 36 motos, Herlings has won 16 and 31 and never finished lower than third in those 36 starts. He has dropped only 17 points all season and boasts a 100% podium record in just his second season in the category.

Tony Cairoli sealed the position of number two for 2018 meaning Red Bull KTM has classified 1-2 for the second consecutive year. The Sicilian has finished on the rostrum 14 times despite dealing with small injuries to his thumb, hand and knee and raised his runner-up trophy thanks to a 2-2 at Assen; walking the rostrum for the first time since the Grand Prix of Belgium.

Glenn Coldenhoff so nearly gave the team a full podium sweep. #259 was fast and competitive at the track where he marked a podium finish in 2016 and charged to a fine 3rd position for a Red Bull KTM 1-2-3 in Saturday’s Qualification Heat. He was running inside the top three in the first moto until a frightening crash that saw him topple off the track. He thankfully retrieved his racebike and rode to 5th place. In the second moto – after holeshotting and leading the opening laps - Glenn fought off the attention of Max Anstie to classify 3rd and missed his first spray of champagne this season by just two points.

Herlings: “It has been an amazing day and it was a blessing to be in my shoes. Everyone had been saying ‘enjoy the day’ but it just ‘went’! To do this in front of my home crowd here at the TT Circuit Assen is amazing: a special day and it was nice to do it in style. I pretty much led the whole of the first moto and then in between races it was hard to stay focussed because there are many friends, family, sponsors who want to congratulate you and I couldn't really do my normal routine! I tried to pass Glenn in the second moto but went down and had to pick up from tenth position and then work to get back to the lead. I managed to get little gap over Tony. It was a great day and it has been a special year. I have to give it up to Red Bull KTM; we’ve been together through this all the way so a big thanks to all the team and all the guys at the factory. Going 1-1, winning the championship, home crowd: enough said.”

Cairoli: “I feel good. It has been a long season and many things happened. At the beginning I was good and very prepared but in the last part I made a lot of mistakes and also mentally I was going up and down with some crashes, mistake and this-and-that. No complaints, like Jeffrey said he won 16 races from 19, so he was the fastest and the strongest all the time. We have to work if we want to keep with him and it’s an honour to finish behind Jeffrey because he is the fastest rider in the world at the moment; I didn't finish second to a slow guy. I know I can still be competitive and have to work a bit harder to be strong the whole race but it is a nice challenge. Thanks to Red Bull KTM for making all this happen and being 1-2 in the championship again. We’ll see for the next two races. For sure Italy in a couple of weeks will be very busy for me and then the Motocross of Nations also. There was an incredible crowd here and it was good for the sport.”

Coldenhoff: “I rode well all weekend long. I didn't have a great start in the first moto but on the first lap I was already third. I was under pressure from Max [Anstie] and felt he was a bit stronger so I pushed harder and went over my limit. I had a pretty nasty crash and hurt my finger. It took quite a while to get back in the rhythm. I knew I needed fourth for a chance at the podium and I saw [Tim] Gajser, so pushed hard again and was only 0.3 behind him at the end; it just wasn't enough. I knew it would be difficult in the second moto but I pulled a holeshot and led a few laps in front of my home crowd which was amazing. I tried to follow Tony and Jeffrey and had pressure from Max but managed to hold him back. Overall I was fourth again and not on the box, which would have been so nice here to have two Dutch flags on the podium and a 1-2-3 for KTM so I’m a bit disappointed. There’s only one chance left now.”

Pit Beirer, KTM Motorsports Director: “This is a special one. Jeffrey has been with us since 2009 and we have been through many ups-and-downs. When he was a kid everything was just getting better and better but then he got some nasty injuries and there were many tough days with this boy, but when you get to know him and see how much effort he puts in to get the results then he deserves this title more than anyone. Tony also had a fantastic season and it is impressive to see what he did but then Jeffrey just topped it off with his work. All our guys make a big effort but Jeffrey is outstanding. It is very emotional to see him at this level. For many years people have talked about him being the best rider in the world but he got injured before he could prove it on paper. Finally he did it, so it’s a special moment for all of us.”

MX2 Championship leader Jorge Prado will carry a 46 point advantage into the final Grand Prix of 2018 (with just 50 points remaining) after continuing his fantastic run of form at Assen. Prado tasted EMX125 title success at the circuit in 2015, a maiden trophy on his debut Grand Prix appearance in 2016 and was victorious in 2017. His eleventh triumph of the season today with clear-cut 1-1 moto performances means he stands close to his first MX2 World Championship in just his second season in the division and with the works KTM 250 SX-F.

Pauls Jonass needed painkillers in his right knee to cope with ligament damage as a consequence of his fall in the Grand Prix of Turkey and has also been unable to train or gain any serious practice mileage for almost two weeks. Despite the adversity the world champion battled back from a first moto, first turn crash and ploughed through the second race to finish 6th overall.

Prado: “First of all congrats to Jeffrey, he did a great job this season. My weekend went pretty well and the Qualification Heat win gave me some good confidence. Two moto wins: it was a good day. I’ve always done quite well here and have always been on the podium. I think the track just suits my style of riding and I had good starts, which meant I could enjoy myself. I think I only need to finish 15-16th for the title now but I don't want to finish 15th-16th! I will try to do my best as always. I have been working hard all season and will keep on doing the same in the last round.”

Jonass: “Normally I like sand a lot but since I had the crash in Turkey with Jorge I damaged the ligaments in my knee and in the last two weeks I couldn't do much. I think I went cycling three times and tried to ride once but couldn't do anything. Today it was not too bad because I took some painkillers but I didn't have much strength in my legs. After two weeks lying on the couch I knew I wouldn't be able to do much: it is difficult to get into good shape but it is so easy to lose it! It is disappointing and upsetting to lose points. Jorge just needs four now…but it is still not over until it’s over.”

The eight-month MXGP campaign comes to an end in two weeks time with the inauguration of Imola as a Grand Prix venue for round twenty of the season.